“…My paintings are about the idea of myths being reality. A kind of creationism meets science. I have a strong interest in Ancient Astronaut Theory and the Anunnaki. Dragons are Angels to me. My body of work is Visionary in that it is based off of spiritual experiences or mystical ideas, and it is Kitsch because it is constructed to look and be timeless. Therefore, I call my work, ‘Visionary Kitsch.’”

Leigh Meinhart is a painter apprenticed by Odd Nerdrum in the summer of 2012. She posed for his painting “The Alien” while there. She received a BFA from the Pennsylvania Academy of the Fine Arts (PAFA) with a major in painting and minor in sculpture in the spring of 2012, after transferring from the Maryland Institute College of Art (MICA). Inspired by Nerdrum, she uses the Apelles palette and is a follower of the Kitsch Movement. Leigh is also intrigued by fantasy and visionary art as inspired by faerie artist Brian Froud. 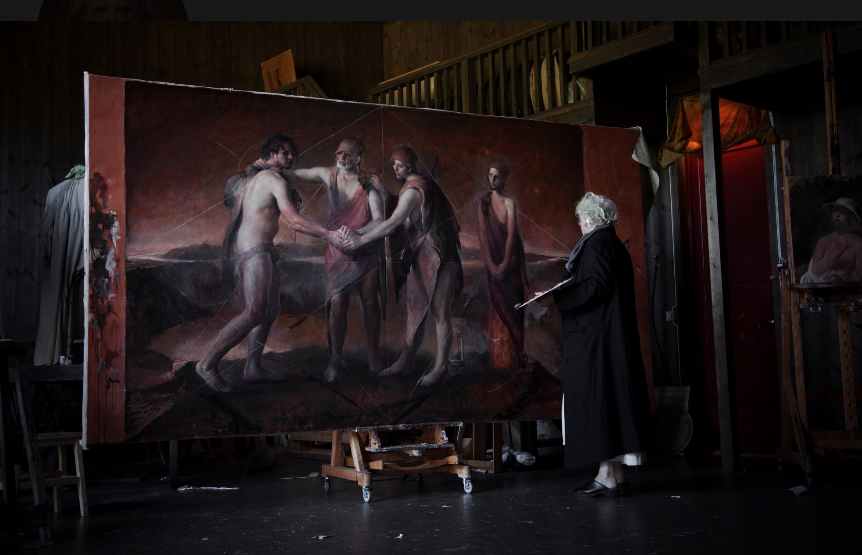 What is the Kitsch Movement?

“Kitsch painting is an international movement of classical painters founded upon a September 24 1998 speech and philosophy by the Norwegian artist, Odd Nerdrum, later clarified in his book On Kitsch. The movement incorporates the techniques of the Old Masters with narrative, romanticism, and emotionally charged imagery. The movement defines Kitsch as synonymous with the arts of ancient Rome or the techne of ancient Greece. Kitsch painters embrace kitsch as a positive term not in opposition to “art,” but as its own independent superstructure. Kitsch painters assert that Kitsch is not an art movement, but a philosophical movement separate from art.”